On Set 4K Monitor Test - In our World every Detail Matters 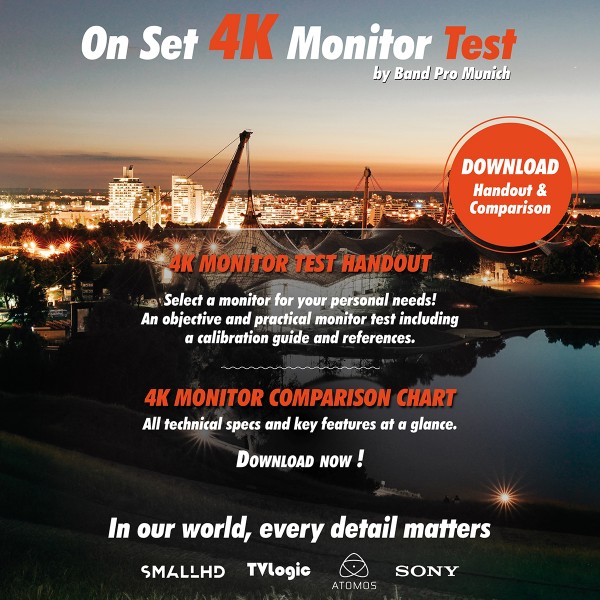 With this test, we wanted to give our customers a comprehensive and objective overview of the currently common 4K / DCI and 4K / UHD monitors. With various tests and additional know-how from Christian Saure (DIT and video operator with on-set experience in various commercials, TV series, feature films, cinema productions, ...) we were able to create a practical handout with calibration overview and results and a 4K Monitor comparison chart – and all this for you to download.

SmallHD Cine13:
The smallest of the Cine series. A really bright and good panel for a 13" monitor and has same i/o and functions as its bigger brothers Cine18 and Cine24.
Because of its flexiblity it is a perfect match for focus pullers, doesn´t matter if studio enviroments or run-and-gun setups but also for 3rd monitor row on set (e.g. make up and costume departmens).

*Update April 2022: with OS5 FW update the monitor will get Dual- & Quad-View among other features.


SmallHD Cine24:
The new 4K/UHD Cine24 convinced us with its 12V DC inputs (GM or V-Mount battery plates) as well as with its 2pin Lemo and USB-C outputs.
Also its low weight, the various mounting options and the nice Software features make the Cine24 a really nice and approved on set monitor.
To be honest, the viewing angle isn´t satisfying and some functions as dual- and quad split are not unlocked yet (status April 2021) and currently the monitor crops the 4K DCI input.

But in terms of price and performance, the Cine24 is one of the best SET monitor in our comparison.

*Update April 2022: with OS5 FW update the monitor will get Dual- & Quad-View among other features.


SmallHD OLED 22:
Same as its bigger “brother” the SmallHD OLED22 convinced us with its power in- and outputs.
It is even lighter and with its true 10-bit and OLED panel this is definitely an awesome on set monitor for everybody who needs clear and accurate colors.
As all 4K SmallHD monitors run the software the dual- and quad split functions are not unlocked yet (status April 2021), as well as the 4K DCI crop.

SmallHD Vision17:
The first Monitor of the Vision series which stand for the HDR ability. It has the same form factor and i/o as all SmallHD 4K monitors, which makes it perfect for on set use. We were really amazed by its picture quality with dark blacks really close to OLED technology and perfect colors untill 1000 nits luminance. We would say, a on set monitor close to perfection, but this has its price.


TVLogic LUM-242H:
TVLogic shows with the LUM-242H a Monitor with the best price-performance ratio in our test.
With a solid panel, high brightness, a good and easy manual calibration workflow it´s a real nice monitor. However, the (7) fans are very loud – which definitely could cause an audio problem for productions on set.

But you can find all information in the handout.


Atomos NEON 24:
We were quite impressed by the panel of the Atomos NEON24, but we have to say it´s not the best on set monitor.
The fans are loud and you can´t use the Monitor with batteries (12V) but only via power adapter.
Although the SSD recoding option could be a benefit. But as it requires NEON Master Control Unit (HDMI) and AtomX SDI Expansion Module (3G-SDI) for the in- and outputs this could be useful as well as obstructive.


Sony PVM-X1800 and Sony PVM-X2400:
Sony shows everyone how it´s done – when it comes to calibration.
These two monitors definitely have the best panel in our comparison and they are best to calibrate.
We do have to point out, that both PVM-X… monitors are voluminous and the required power input (24V) makes it hard to use them on set.

Never the less via calibration we got results of Delta E <1, which is near reference monitor and perfect to judge the picture and colors.

Having a closer look on the DP-V2411 from Canon: The monitor shows a really good reference picture in 4K and HDR and even out of the box the measuring results in Salman Studio are more than satisfying. With a few tiny touches in the very extensive but user friendly menu, we get easily a delta-e under 1. This display is not for set in the first row, with the top handle it is easy to move, but the fans can turn loud. We can easily see it in postproductions or in DIT vans.