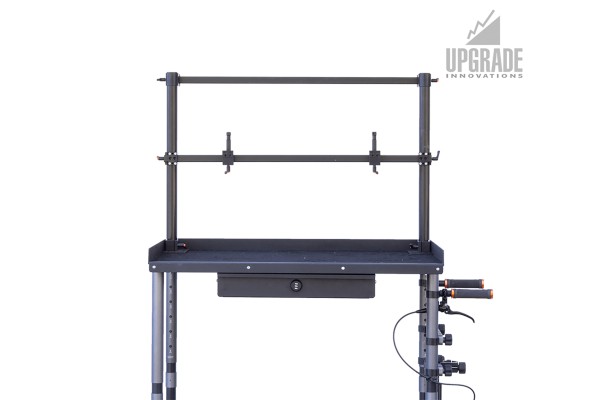 The Whaley Rail II is a collaborative design between Ben Whaley (667 DIT) & Upgrade Innovations. This system provides DIT’s with a solid lightweight mounting frame to hold multiple production monitors and other accessories.

Designed to integrate with Inovativ Echo without needing holes drilled through the cart deck, the Whaley Rail II can also be mounted to other Inovativ carts, including Scout, Voyager & Apollo models. The Whaley Rail can be built to practically any cart deck, so other camera carts such as Adicam, Magliner & Yaegar among others can be upgraded with this professional monitor mounting frame.

The modular mounting rails eliminate unwanted motion & provide strength and stability, while still allowing for horizontal and vertical adjustments. You can customize your Whaley Rail II to be either a single or double rail system, offering various setup options for monitors and accessories. Both the single rail and double rail systems include two rail clamps to 5/8 baby pin in the base setup.

For a tight location move or for transport, quick release the Whaley Rail II frame from the deck via tool-less levers. Control height and various frame positions to maximize and respect the length and depth of your cart build. This modular design allows for various options including the Packed and Studio versions and provides build flexibility.

The build flexibility allows for the Whaley Rail components to be easily moved between multiple cart sizes so you can adapt to your project scope. With a few extra components, swap your rail frame to another cart by making use of a different length cross rail.

The Packed and Studio versions have established rail lengths and vertical post heights based on cart model length.