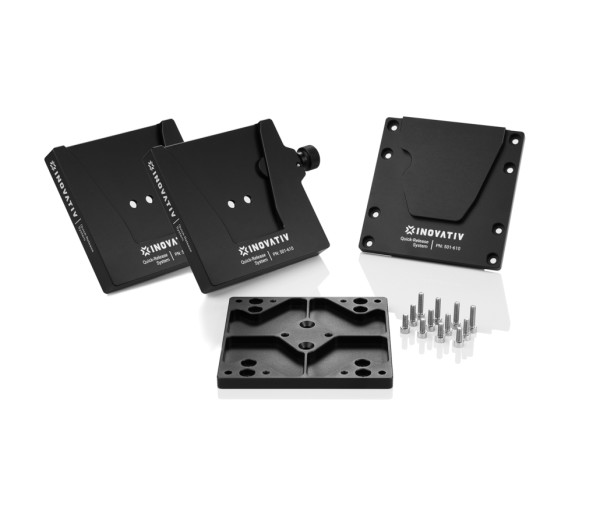 Details
Details
With the need for multiple monitors on set and having multiple options for setting them up, we... mehr
Menü schließen
Produktinformationen "INOVATIV QR PRO (Quick Release) System"

With the need for multiple monitors on set and having multiple options for setting them up, we saw an opportunity for creating a universal product that allows easy, secure and quick setup and breakdown of your monitors.

Whether you are mounting a monitor on your desk in the home office, setting up a mobile workstation on a production cart, or setting up a video village, with the INOVATIV QR System, your monitor is mounted, locked and secure in just a few seconds.

Why the INOVATIV QR System?

There are many VESA mounts available on the market. However, a VESA mount requires screwing the mount directly to the monitor making quick attachment and release difficult.  The INOVATIV QR System consists of three plates, one attaches to the monitor, the second attaches to the VESA mount, and the third is a spacer plate which may be necessary for certain monitors which have a recessed mounting area.

The plates connect to each other using the vDrop system, a patent pending quick-release dovetail mount developed by INOVATIV.

What’s the difference between each configuration?